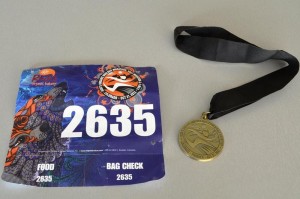 I ran the Boulder Half Marathon on Sunday. It remains one of the prettiest courses that I have ever run. It was a perfect fall day. The temperature at the start of the race was perhaps 50 rising to the mid 60s by the time I finished. The sun was bright. The leaves on the trees were all reds and bright yellows. The route passes by many farms and horse pastures.

This year I have been focusing on incrementally improving my speed. I’ve run three half-marathons in 2012, each one, slightly faster.

It’s funny, even this small improvement moves me from the bottom half to the top third (34 of 103) for my age/gender.

I’d like to get my half marathon time under 2 hours. I have been steadily improving the pace at which I can run a single mile or two, but keeping that up for 13.1 miles is not something I have been able to sustain – yet.

Any advice for improving my speed/stamina more quickly?